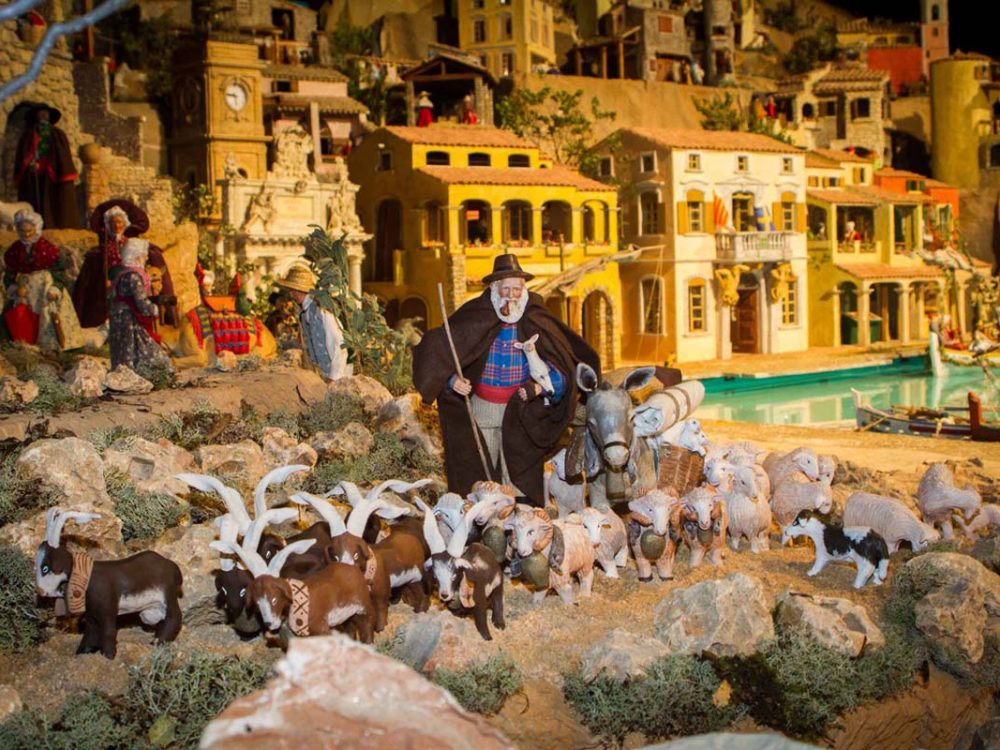 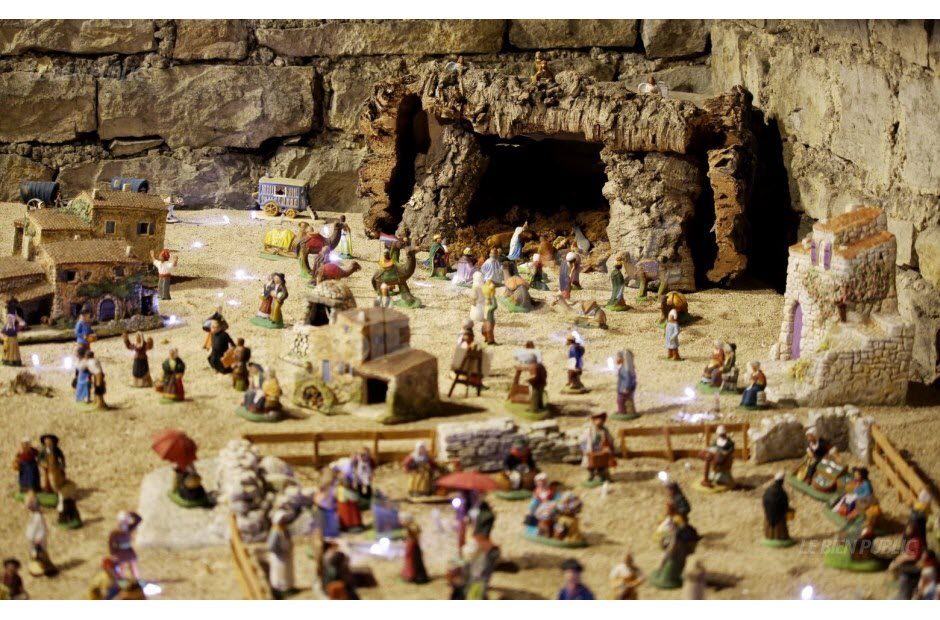 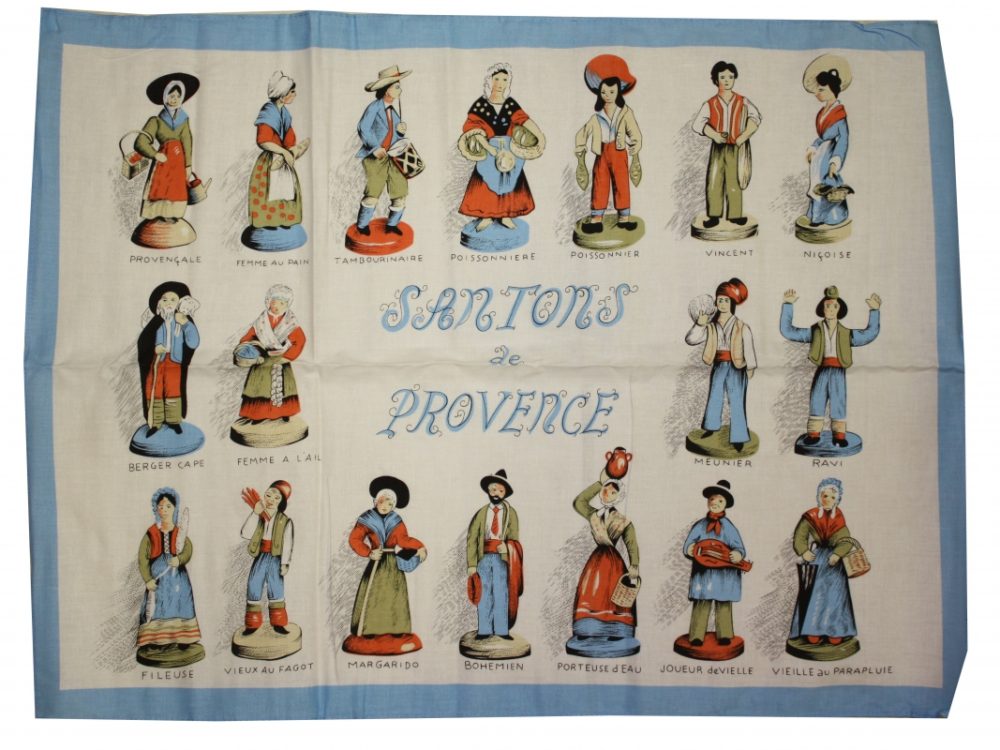 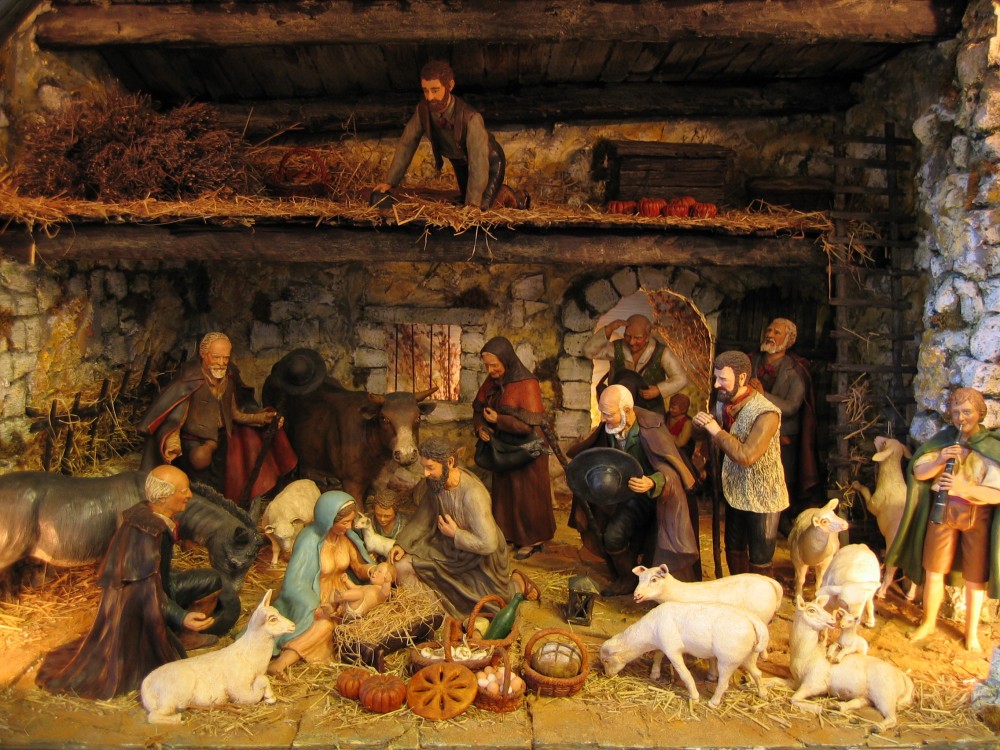 These Christmas crib figures or Santons are an authentic folk tradition, and many provençal homes still maintain elaborate Nativity cribs with the santons today.

The crèche provençale, or provençal crib, has been around for centuries, but the significance of the santon (which means in provençal “little saint”) began immediately after the French Revolution of 1789. Then churches were forcibly closed and sacked. Large nativity scenes were prohibited too, and so these intimate, domestic cribs in private homes assumed a key role in keeping alive religion and tradition (as well as a resistance to France’s excesses of post-revolutionary fervour).

The extraordinary thing about these cribs was that they did not only include the Holy Family, shepherds and Three Kings. The ordinary peasants of Provence were just as important.

Some are seen paying tribute to Jesus. Others carry on their everyday activities around the crib in a typical provençal landscape, featuring olive trees, a mill, a school, a bar and so on.

The provençal crib also has characters like gypsies or Corsican bandits, who might normally be seen as outcasts or outsiders.

Here they rub shoulders with bakers, fishermen, musicians and dancers and card players, as well as village dignitaries such as the mayor and the priest. It’s a joyfully inclusive celebration and everyone is invited.

There will be regional variants too: go west of Marseille and you will find Arlésiennes, salt-flat workers and the bulls of Camargue. Go north to see lavender sellers and truffle pigs.

A regular feature is a ravi, or ravie, a man or woman, either a mystic or the village simpleton, throwing up arms in a transport of delight.

When preparing their crib for Christmas, some families collect stones, moss, rocks, and branches from the local countryside each year to embellish the setting.

They will move the figures around during Advent and Epiphany to illustrate the progress of the story, inching the Holy Family and the Three Kings towards the stable.

The baby Jesus isn’t added until midnight on Christmas Eve. Note the empty pillow at the center of this magical crib, which we photographed in Aix en Provence in the early evening of 24 December.

New figures might be brought in year by year: a true provençal crib is never bought “ready made” but is constructed little by little.

Thousands of permutations exist and no crib will look quite like any other. Ambitious crib designers deploy santons of several sizes in order to create the illusion of perspective.

Escoffier, a santonnier, or santon-maker, with a shop in Marseille’s Old Port, sells some 250 different figures there and manufactures over a thousand types at the workshop in Aubagne.