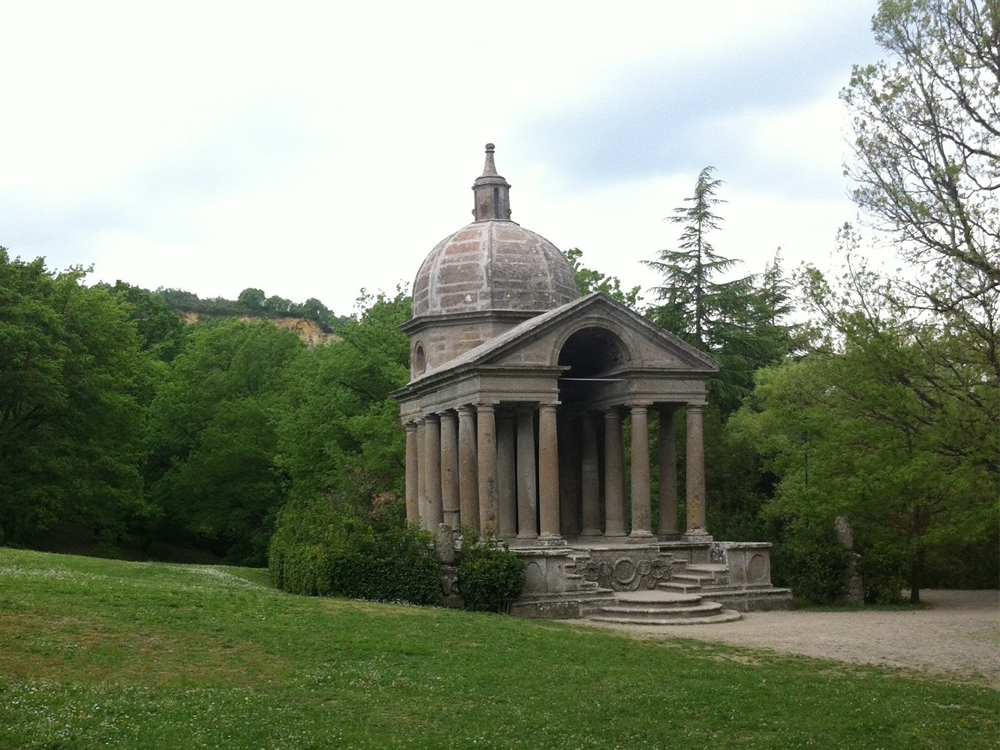 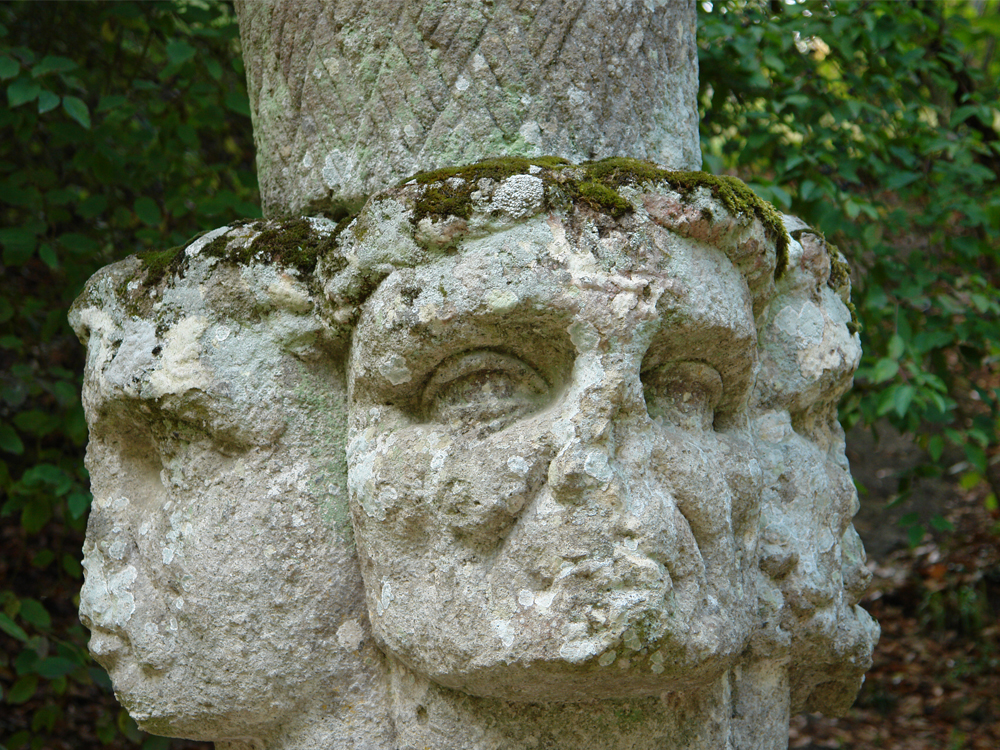 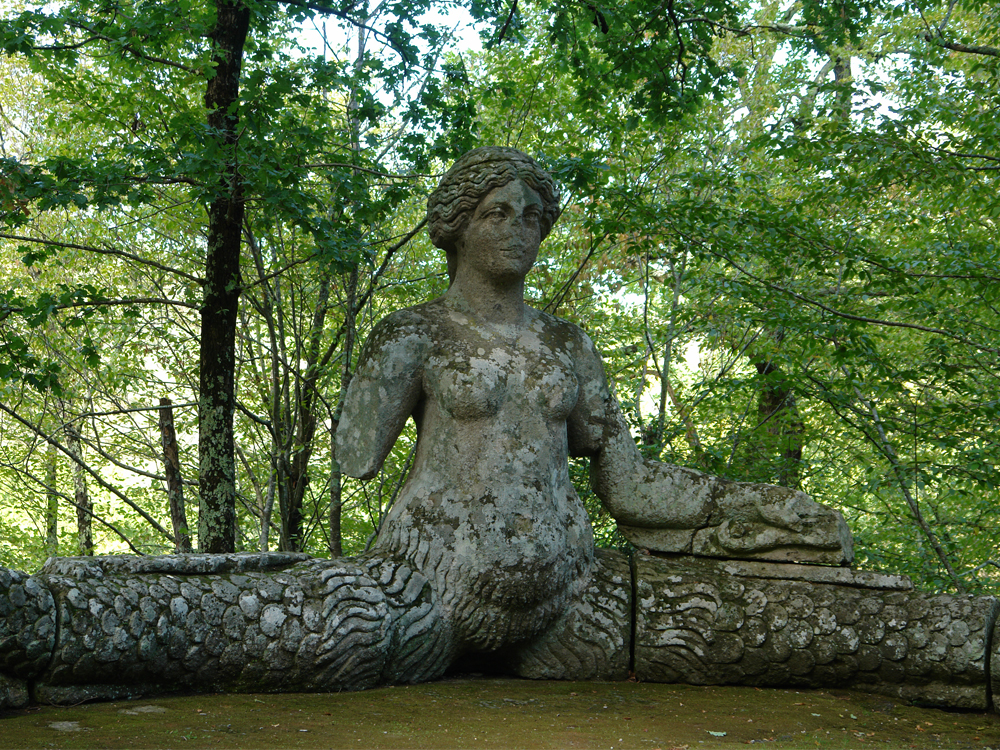 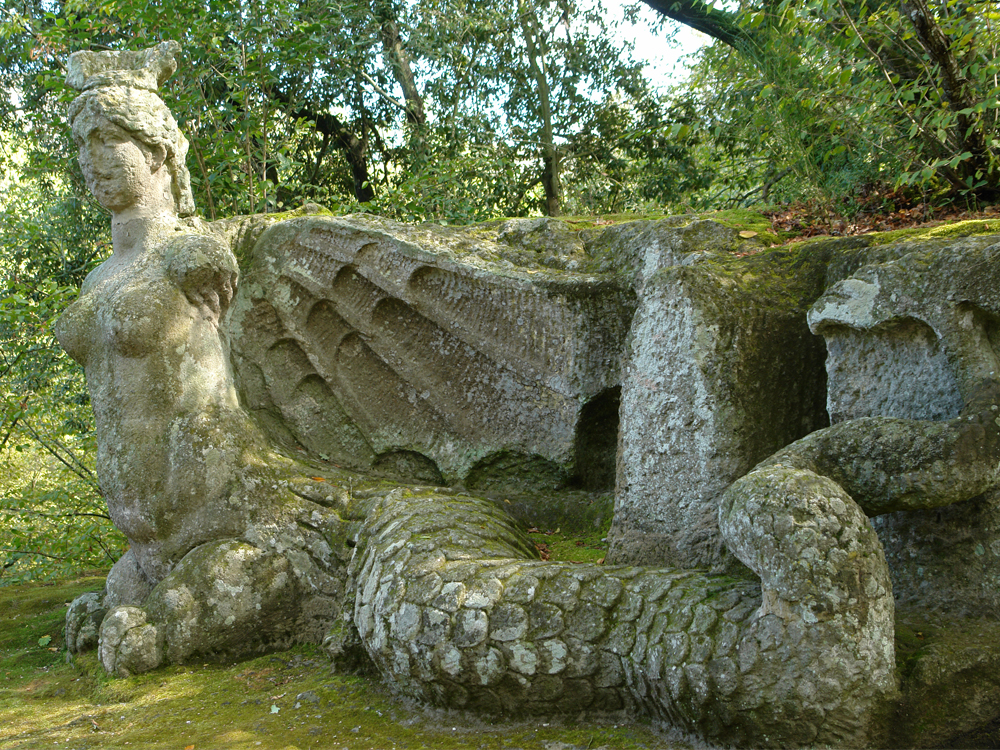 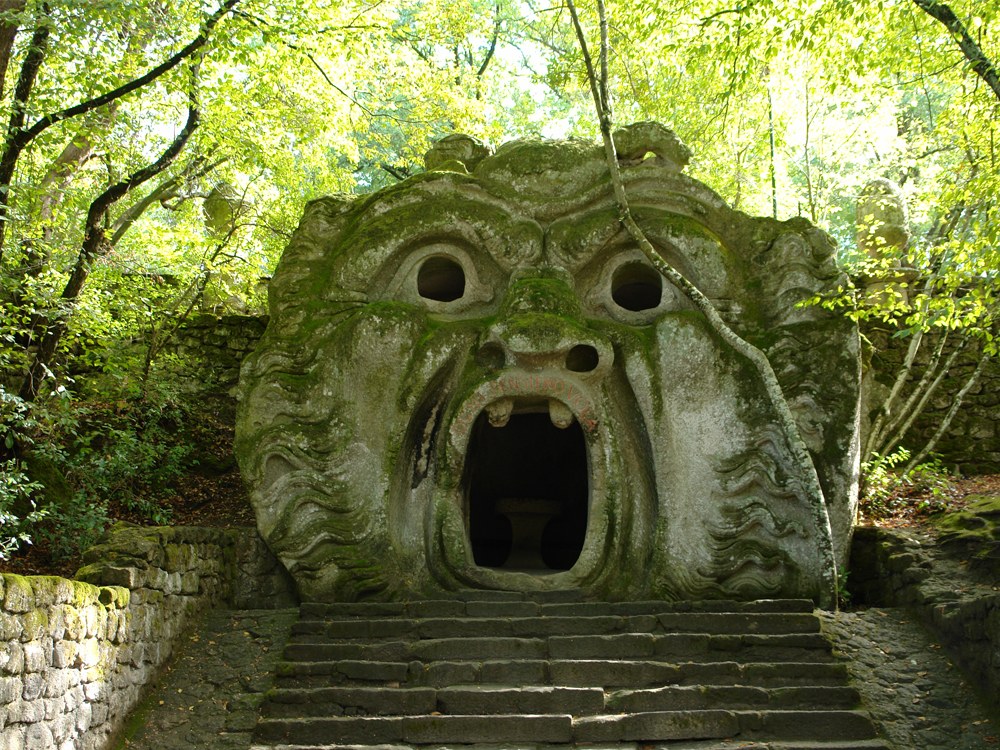 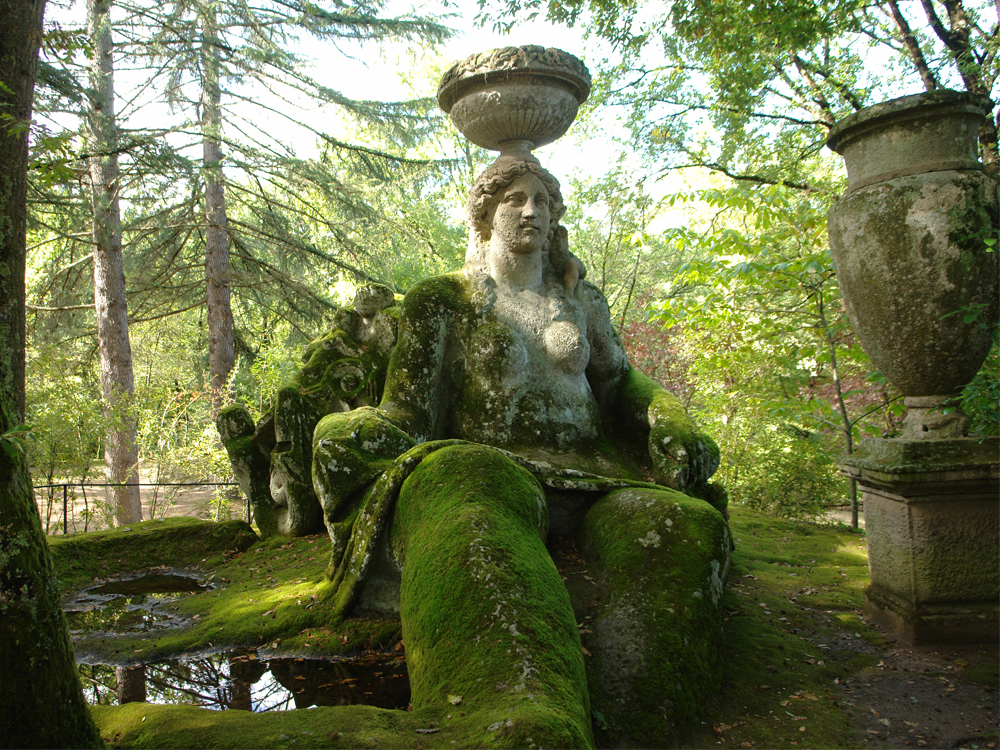 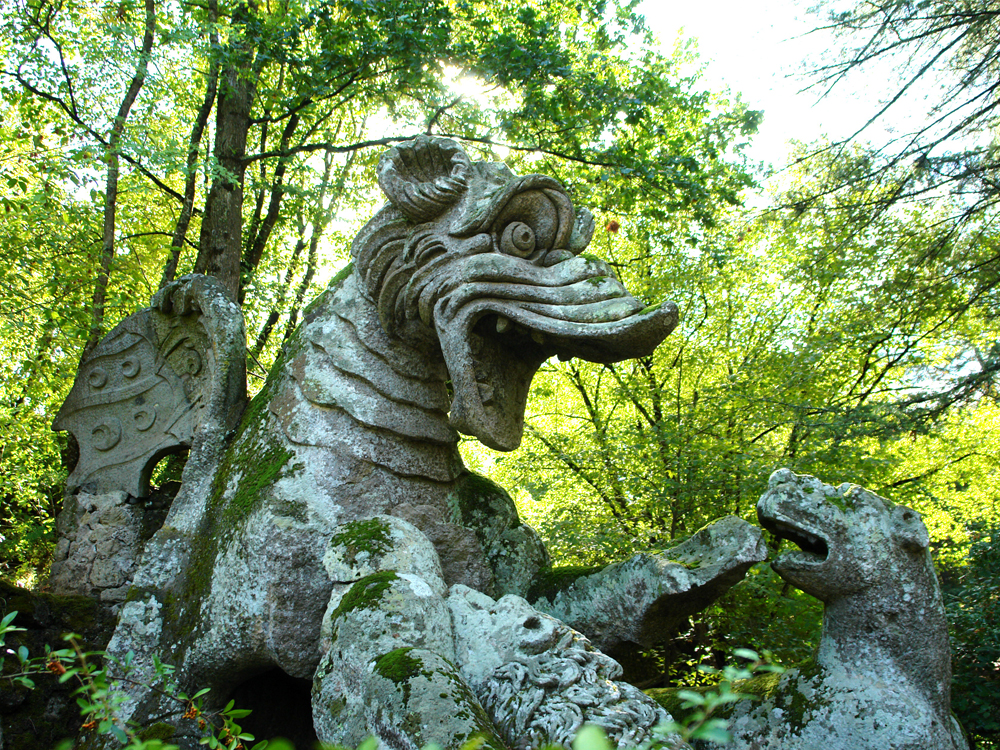 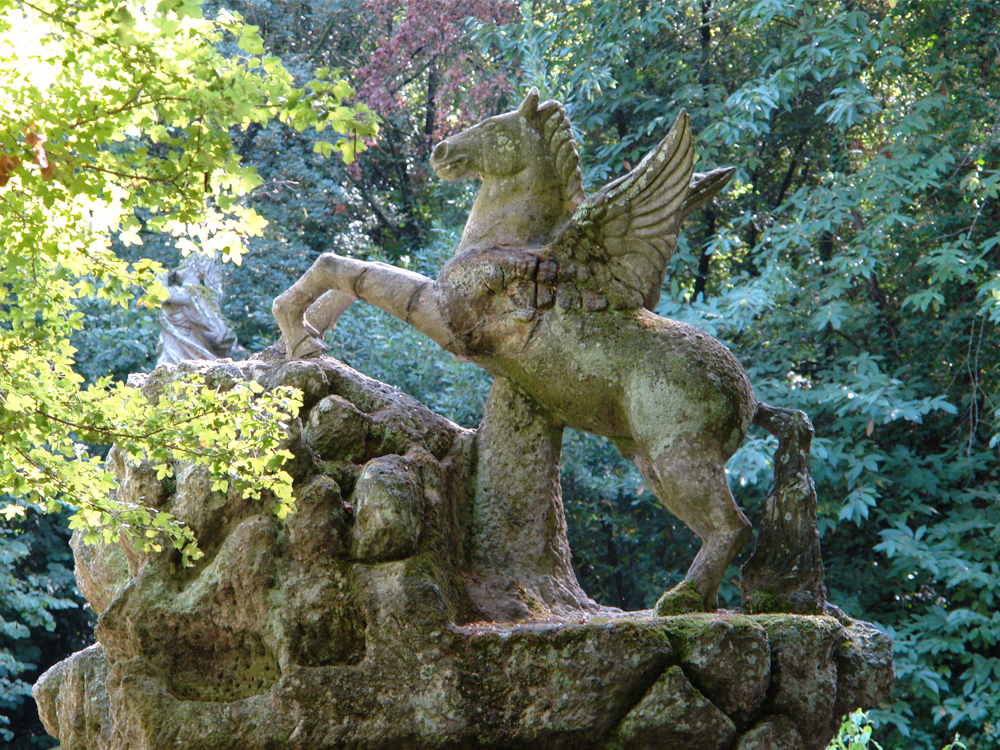 Bomarzo is a town and commune of the province of Viterbo (Lazio, central Italy), in the lower valley of the Tiber, approx. 68 kilometers north-northwest of Rome.

The History of Bomarzo and the Park of the Monsters.

The bishopric was established around 400 AD, which in 700 gained territory from the suppressed Diocese of Ferento. It was a historical fiefdom of the Orsini family, whose castle is at the edge of the densely built town, until it was sold to Ippolito Lante Montefeltro della Rovere in 1645. Lante was elevated to the title of Duke of Bomarzo. The Sacro Bosco (“Sacred Grove”), also called the Garden of Bomarzo, is a Manieristic monumental complex located in Bomarzo, named after the many larger-than-life sculptures, some sculpted in the bedrock, which populate this predominantly barren landscape. A sphinx at the entrance of the Park of the Monsters.

It is the work of Pier Francesco Orsini, called Vicino (1528–1588), a condottiero or mercenary and a patron of the arts. He was greatly devoted to his wife Giulia Farnese, daughter of Galeazzo Farnese, Duke of Latera, (not to be confused with Giulia Farnese) and when she died, he created the gardens. A small octagonal temple was added about twenty years later to honor Orsini’s wife, Giulia Farnese. The design has been attributed to Pirro Ligorio, a well known architect and antiquarian of the time.

The park of Bomarzo was intended not to please, but to astonish, and like many Mannerist works of art, its symbolism is arcane; for example, one large sculpture is of one of Hannibal’s war elephants, which mangles a Roman legionary, and another is a statue of Ceres lounging on the bare ground, with a vase of “fruits of the earth” perched on her head.
The many monstrous statues appear to be unconnected to any rational plan and appear to have been strewn almost randomly about the area, “just to set the heart free” as one inscription on an obelisk says.

The reason for the layout and design of the garden is largely unknown: perhaps they were meant as a foil to the perfect symmetry and layout of the great Renaissance gardens nearby at Villa Farnese at Caprarola and Villa Lante at Bagnaia. Next to a formal exedra is a tilting building, the so-called Casa Storta or Twisted House.
During the nineteenth century and well into the twentieth, the garden became overgrown and neglected but in the 1970s a program of restoration was implemented by the Bettini family, and today the garden, which remains private property, is a major tourist attraction. The surreal nature of the Parco dei Mostri have inspired many artists for example Jean Cocteau and the great surrealist Salvador Dalí, who discussed it at great length. Authentic Provence highly recommend you to visit this magnificent garden.